Factory faults in refrigeration compressors are very rare. Depending on compressor’s make, they
vary between 0.001% to 0.1%. It is prudent, therefore, to have a good look at the whole system
when faced with a faulty compressor, rather than to blame compressor by default.
Often you will spot something obvious, like an evaporator fan not turning, or a broken gas pipe
for example and you will know why your compressor lapsed. More often, however, there will be
no obvious clues and that is when you should have your compressor cut-open and examined for
the reason of its failure.
There are no nationwide statistics on the most common system faults leading to compressor’s
failure available (or at least I have never come across one) therefor we have kept our own for the
last 10 or so years.
According to our statistics, High Discharge Temperature related failures are the most common
on the list of system faults leading to a compressor’s failure. It is important though to remember
that the HDT might have developed from a flood-back. (The Floodback chapter gives a detailed
explanation).
In the past, it used to be the liquid-refrigerant related damages that took a second place on the
list, but not any more. Unbelievably; start winding burnout suppressed the liquid!
That does not give our fridge-mechanics-professionalism credit – especially given the fact that
the most common reason of a ‘burnt start winding’ is the incorrect wiring of a replacement
compressor during the start-up. A foolish way of killing a compressor!
In the third place on our list is floodback, followed by slugging and a washout.
There are also electrical problems, presence of moisture in the system or lubrication problems.
Let’s have a closer look at these faults:

Lets have a look at possible system faults leading to these problems:

Warning: When a compressor fails under these conditions, it will almost certainly: lead to
contamination of the entire system. Detergent cleaning and burnout kit are essential before
starting up replacement compressor.

3. FLOODBACK
Damage caused by liquid refrigerant returning to the compressor during the ‘On’ cycle. This
condition – if not corrected in time – will lead to slugging-like damage to the valves or will turn
into High Discharge Temperature condition.
Typical symptoms:

Liquid refrigerant returns to the compressor during the ‘On’ cycle. At the beginning of the
process some of the droplets evaporate and the other mix with oil, lowering its lubricating
properties. This mixture wears bearings, scores rods and shafts, leads to excessive working
clearances – causing compression inefficiency and/or rotor drag. The droplets that evaporate,
lower the compressor’s temperature. As the temperature goes down, more droplets escape
evaporation and travel straight into the cylinders.
This is when the floodback might cause damage similar to the slugging. Not all of the droplets in
this torrent will evaporate, and those that do not, can not be pumped. Thus they are forced via
the discharge reeds to the discharge heads and farther to the discharge pipes. Discharge reeds are
designed to take some hydraulic hammering, but discharge pipes and suction reeds are not,
therefore one of them brakes. It is usually the discharge pipe – it brakes of at a joint due to
strong vibrations. Now, our compressor is not only poorly lubricated, it also partially discharges
back into suction side. Now the picture changes dramatically. The compressor – from a
refrigeration point of view – becomes entirely inefficient. There is no – or very little – liquid
refrigerant passing through an expansion device, therefore no or very little cooling action takes
place. There are no more liquid refrigerant droplets coming in; the temperature in crankcase rises
and suction line super-heat goes sky high. A perfect HDT condition.
It is important to mention here, that actually, more often than not, a Floodback turns into a High
Discharge Temperature without braking any parts – just wearing them down, and by doing so
constantly decreasing the compressors pumping efficiency. The final effect is the same.
The following can cause liquid refrigerant to enter a compressor:
· System overcharged with refrigerant (capillary tube)
· Dirty or blocked evaporator air filter
· Evaporator fan out of order
· TXV wrongly adjusted or loose bulb
· TXV oversized
· Faulty or too low set thermostat
· System running outside manufacturer recommendations*
· Etc.
*System running on too low/high condensing or evaporating pressure/temperature.
What to look for to detect this problem during service:
An easy one to spot, even without any measuring instruments: The compressor’s body feels cold
to the touch of hand. You should be especially alarmed if it feels cold at the crankcase.
Correction should be easy if you check the system for the “a” to “g” faults.

The following can lead to refrigerant migration:
· Lack of /or faulty crankcase heater
· Leaking liquid line solenoid valve
· TXV problem or oversized
· Etc.
What to look for to detect this problem during service:
An elementary condition to notice: Terrible, rattling noise during start-up – which tells you that
you got there too late and you are looking at an already destroyed compressor.
Because slugging destroys a compressor so quickly and efficiently – its inside usually remains
pretty clean, which is not the case with washout or floodback.
For the same reason as in liquid washout, damage to the electric motor is possible.

What to look for to detect this problem during service:
A noise during the compressor start-up is a give-away. Another clue is the compressor’s
temperature after a few minutes of running time. It should feel warmish to touch (+/- human
body temperature). If it runs cold, the presence of liquid refrigerant should be suspected, either
due to migration or floodback.
It is important to realise that liquid washout may lead to winding burnout when the bearing seizes
on shaft, thus locking the rotor, or when neatly broken off con-rods let the motor run without
cooling.

· Windings DTE
Typical Damage:
· Scored bearings
· Broken rods
· Scored crankshaft
· Burnt electric motor
There is a certain amount of oil pumped out of the compressor with each stroke of the

piston
(usually 3% of discharged volume). The same amount of oil must return to oil-sump if the
compressor is to be sufficiently lubricated. In a properly designed air-conditioning or
refrigeration system the oil travels along with refrigerant, completing the full circle.
The following can lead to lack of lubricant in the crankcase:
· Gas velocity too small to pick-up the oil:
 Due to lack of refrigerant in the system or
 Due to oversized suction line
· Compressor short cycling
· Blockage in the system

· Lack of oil traps in long vertical pipe run
What to look for to detect this problem during a service visit:
The noise is good enough to give you an indication, but unfortunately, as in the case of any other
mechanical damage, usually it is too late to correct the problem.

· Trips earth leakage
Typical damage:
· Copper plating or/and rust on steel surfaces
· Scored bearings
· Scored crankshaft
· Burnt electric motor
Presence of moisture in the system plus high temperature triggers a chemical brake-down of oil
and refrigerant, which in turn causes corrosion of copper and brass parts. This corrosion initiates
a chemical process that finally washes out copper from all affected parts. The washed out
particles travel with the oil to plate out on compressor metal parts. Plating on non-working parts
does not matter, but it often rubs itself into bearings; scoring them and reducing working
clearances. Bearings’ seizure follows.

The following can cause moisture/water presence in the system:
· Careless, sloppy installation / compressor replacement
· Neglecting to vacuum the system
· Failure to install dehydrating filters

What to look for to detect this problem during service:
Burnt winding is a good indication. Of course, there is nothing one can do, except discarding
this compressor and buying a new one.

There is still a lot one can do to avoid the same
happening again: Read Compressor’s Terminals Markings! It is always there. Wire the
windings accordingly! Then go through the above list and correct whatever needs to be
corrected.

8.2 RUN WINDING BURN
Although only run winding is burnt, it often appears as a general burnout. This is due to the fact
that the temperature of the burning run winding is so high that it partially burns the start-winding
insulation too.
The following can lead to this type of burn:
· Lack of cooling
· High load
· Mechanical problems
· Faulty run capacitor
· Loose terminals
· Faulty contactor
· Under or Over Voltage
Usually, the absence of mechanical damage suggests electric network problem.
8.3 SPOT BURN
This is a short, either between windings, between wires, within a winding or to ground. The
damage is confined to a small area. Usually, the reason is difficult to trace, but look for the
following:
· Contaminants
· Metal shavings or shrapnel bombarding windings
· Vibration
· Voltage surge (lightning, starting capacitor discharge)
Three Phase Motors:
8.4 GENERAL BURN
All three windings uniformly overheated or burned. This can be either a system problem or an
electrical network problem.
· Lack of cooling
· High load
· Mechanical problems
· Compressor short cycling
· Under or over voltage
· Loose terminals
· Faulty contactor
8.5 SINGLE PHASE BURN
Two phases of a three-phase motor are burned or overheated. This is a result of a lack of current
flow through the unburned phase that caused an overload of the remaining phases.
One of the following can lead to this damage:
· Faulty contactor
· Loose compressor terminal (inside/outside)
· Blown fuse
· Unbalanced voltage
8.6 SPOT BURN
See Single Phase Motors.

SUMMARY
More than 99.9% of compressor problems, mechanical as well as electric motor related, are
initiated by refrigeration / air-conditioning system problems.
Careful and patient examination of a system during the service visit should reveal most of the
looming problems and lead to their correction. If, however, the compressor is lost, the first
priority is to determine the cause of failure and its correction – after all it is senseless to have two
compressors fail in a row – for the same reason! (If you are not equipped: to do this kind of
analyses, AC Compressors will assist). 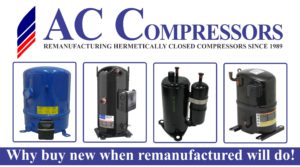